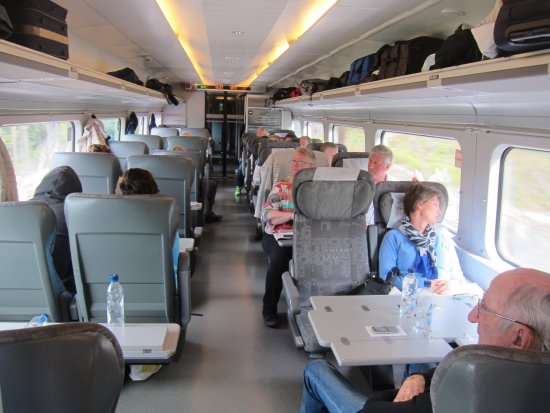 He was sitting on the train in an unenviable position, his bladder was going to explode, As for getting to “Kassel”, it will take more than an hour. “Why did you not go to the bathroom at Hanover Station, before you boarded the train, why?” He said it to himself with a sigh.

Although the train baths are no more than 10 meters away from him, the problem was more complicated. He bought from “Hannover” the expensive camera that he had dreamed of for some time, and put it in his large bag, preferring not to order it online, and now he is locked into his chair , He can’t leave this bag and go to the bathroom, especially with this black man sitting in front of him, “Why didn’t I book in first class, why? Certainly, I will not have such things, which you now see everywhere in Germany, wherever I go, I find them, ”he said to himself and mourned.

“But this is our fault, our country is the one that allowed these people to reach here. Our borders seem like a huge hole through which they were able to penetrate.”

He was talking to himself when he felt that the black man gave him suspicious looks. He tried to not look, but he could not, in his mind many scenarios loomed.

He must be planning to steal the bag now. “He wants to steal it, this nigger, obviously.” he couldn’t handle it anymore.

Next to the black man, a German girl came to sit. He looked at her, amazed at how she chose this place and was not afraid. He told himself that they are now marrying them.

He smiled as he imagined his mother’s reaction if he told her that he wanted to marry an African woman, “This is instead of improving the offspring and bringing me a German girl .. What do you think your children will be? Sure black.” His bladder pressed him again .. He couldn’t keep smiling, He has to act.

The German girl was holding her stylish phone and talking in unison, He made his decision, and tried to gather few words from what he had learned over the past year and put them in a proper sentence, and with a broken German language, directed his speech to the German girl saying:

“Excuse me, is it possible to leave my bag with you for a moment until I enter the bathroom and come back”, the girl looked at first with astonishment at his request, then smiled and said to him: “sure” ..and continued her call ..and Without any delay, he rushed to the bathroom.

Upon his return after a few minutes, his worst nightmare occurred. He did not find the bag and did not find the German girl. The black man was sitting reading a book and unaware of the disaster that had happened. He asked him with panic and in broken English: “Where is the bag .. Where is the girl ..? The black man smiled for the first time, saying, “Oh, your girlfriend, took the bag and told you to join her when you return from this direction.

” The train was about to stop .. We arrived at the station Nordheim .. Nordheim .. Thank you for using German trains”

On the opposite sidewalk, the black man and the German girl were jogging happily pulling out the big bag, They paused for a moment, when they were certain they were far enough away. Looking at each other, they kissed  lovingly, Then they went on.