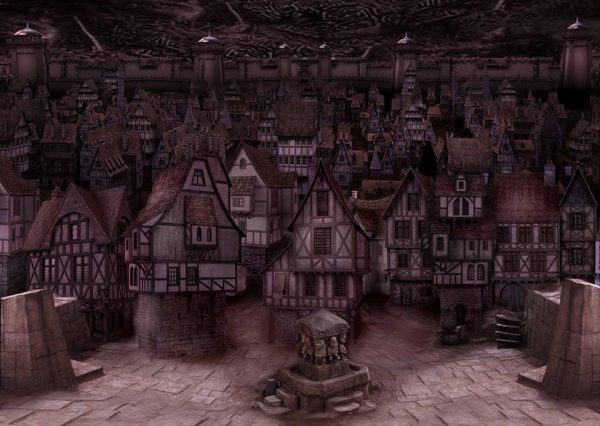 Once upon a time, there was a ghoul named “war”, and in the city of ghouls, war would force himself to wake up every day to go to work. war’s work was to throw people every day into the burning oven to die, a chore he did every day, He gets up heavy early in the morning, brushes his teeth, eats his usual daily breakfast, goes to the workplace, sits at his desk, people begin to show, mostly young people, he makes them wait for a little while the oven starts to burn as a result of burning the wood, then starts dipping them as groups and throwing them into the fire.

His work period ends to hand over the shift to another coworker, he returns to his home to rest before he goes out in the evening in his usual routine with the rest of his ghouls’ friends. In the evening he finds himself on the sofa in someone’s house, four or five ghouls carrying ghoul beer in their hands and arguing about work and friends.

“war,” said to his companion, “media” grumbling, please do not send people to me with this amount, the number has increased and our department can no longer bear the large numbers, the ovens are working to their maximum capacity, “media” works in the same company as “war”

“media” simply replied, they are the ones who come to me, I only transfer them to your administration.

Ugh… war grumbled about the media… as if he didn’t know what he was doing, but he didn’t just blame him.

The administration is thinking of promoting you, “war.” The ghoul said whose name is “ignorance.” You will be responsible for the regional office, The ghoul “Racist” replied, You are no longer a local manager… You deserve it.

Damn it… No one works in this company… Greater responsibility means more work. The pressure on “war” was really great.. Throwing people daily into the Holocaust is not an easy job.. Then he can no longer bear all this absurdity… So he left the evening for the first time, angry.

Despite that, he goes to work every day, and before entering the workplace he sees a homeless ghoul trying to prevent people from entering the company, “Do not enter .. Do not enter… Why do you want to die”… But people do not listen, rather, On the contrary, they push her, beat her… They spit on her, at one time someone hit her and then tore her clothes to make people laugh at her, “Get out of my face you idiot.” A routine scene he sees daily before “war” enters his work.

But no one knew what happened to war that night. It is said that he worked a lot on that day, He threw many people into the oven, and people were crowding before the working hours ended, a woman came to him with her son minutes before closing time, to tell him: Please .. Burn my son… Please throw him to death, we came from a far place.

He could not refuse her request.

Before seeing him for the last time, everyone says that he was seen talking with that homeless ghoul whose name is “peace”, no one knows what they talked about together, but he was seen helping her to get up after someone kicked her.

Many blamed the pressures of work, perhaps he had to take a vacation, some said maybe it was out of emotional reasons, he was never seen with a ghoul flirting with each other, while others assumed it was the loneliness he was living in.

That evening, the ghoul war was found dead in his apartment, and he had hanged himself with a rope.