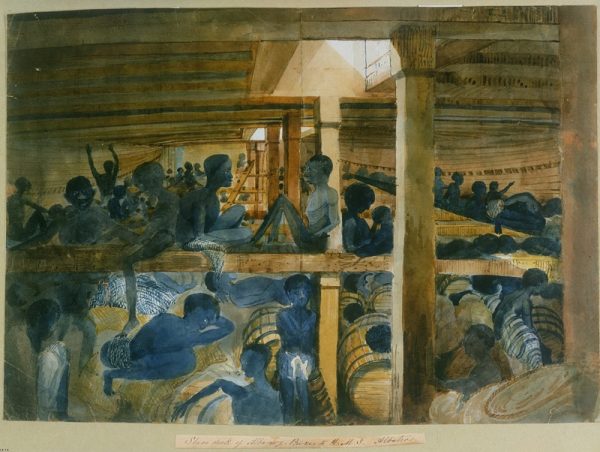 He kept looking at the handcuffs that held his hands with a burning look, while he was standing waiting for his turn to board the ship, the white devil did it then, the despicable colonist catch him and manage with his magic to win him, he was feeling injustice, but what really made him broke was sharing of these lines with the rest of the mob.

In the belly of the ship, as it drove with them towards their eternal hell, the king of the Taqawa tribe was sitting on the rot, handcuffed and legs shackled. He barely opened his eyes, but when he opened them he saw that young man sitting in front of him smiling with joy ..

The young man did not speak at first, but kept smiling gloating, then suddenly he said:

I am laughing because I see you in this tragic situation, O venerable king. Finally, you humbled and sat with us, the trash .. the scum .. Here you have become a scum like us ..

Are you laughing .. Are you laughing at the fate that awaits us all ..  We will turn into slaves on the land of the white devil.. the filthy foot has set on our pure black land .. Our goods will be plundered .. We will be flogged, our wives will be raped, and killed .. Are you insane? Is this the time of gloating? ?!

The young man looked at the king mockingly … Then he suddenly Stand Up , Stand up with his handcuffed , He approached .. He approached the king until he smell his breathed, then said angrily:

You .. killed my father .. Yes .. I saw you as a child and I did not forget this scene as long as I lived .. You killed my father .. You crushed him .. My mother tore her clothes in front of you .. She became a naked .. She said to you rape me but do not kill my husbent .. But you killed him .. and sat laughing sarcastically .. and I .. Who am I .. I was your slave .. What is the difference .. We were slaves and we would be slaves .. But you are the king .. a God .. the transcendent .. who looked to us always like insects..but you were king over a group of insects … on a throne of ignorance, primitivism and illusion … and now you have fallen … and finally … you have fallen ..

Suddenly he raised his handcuffed hands aloft, and two white people appeared behind him. They inserted a key into his handcuffs and it fell .. The young man smiled again .. before he spat in the king’s face and left the cellar with the two men.

The king looked steadily at the window, the land was already on the horizon.